In 1975 I lived in the White House residence for 31 days…nearly all during the month of September. A chapter in my book that I am currently writing is called “31 Days Hath September”…combining the month, the number of days I lived in the White House (obviously not all in September) and the riddle that many of us learned in school to help remember how many days there are in each month.

September of 1975 was a very eventful month at the White House and most especially for the Ford family. It was a “roller coaster” month of emotion, to say the least. I was there to help care for the president’s Golden Retriever, Liberty, and the puppies that were due that month. Little did I know what September held in store for all of us…

Five major events happened that month that I recall distinctly… 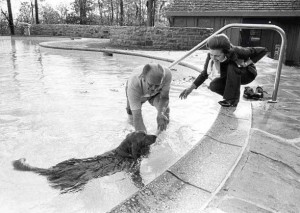 The President, Mrs. Ford, and Liberty at Camp David

The fifth event that I so vividly recall happened 40 years ago today at the presidential retreat, Camp David, in the Maryland mountains. Unbeknownst to Mr. Ford, his presidency had reached a crossroads…perhaps more accurately a fork in its path. During the afternoon of September 28, 1975 a private and unreported meeting took place in the presidential residence at Camp David called Aspen. The outcome of that meeting would, in no small measure, shape the future of the Presidency, the nation, and even the world. I will share what I know about this meeting in my book in the chapter I am currently writing, “31 Days Hath September”.

I’ve attached copies of the Presidential Daily Diaries for the weekend of the 27th and 28th of September 1975 with links below. The diary of the 27th records a typical day at the White House and the late afternoon departure to Camp David by helicopter. Some members of the president’s family were already at Camp David and so they do not appear on the flight manifest. The diary for the 28th is unusually short with a rare, large void of time after the president’s second swim of the day in the pool below Aspen. It was during these hours that the course of history was determined…