The Story Behind The Book Project

Follow the Yellow Line: Eyewitness To History
The amazing journey of a Vietnam-era draftee 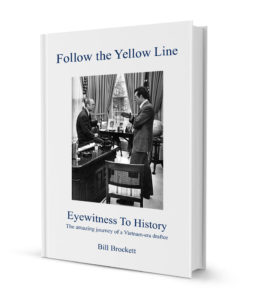 On July 1st of 1974, Army Specialist Bill Brockett was assigned to the White House Communications Agency — one month and nine days before the resignation of President Richard Nixon. Bill worked in Video Tape Recording in the Old Executive Office Building within the White House grounds. Follow the Yellow Line: Eyewitness To History is Bill’s memoir of his experiences…up close and very personal.

Bill is believed to be the only person who, at the age of twenty-four, personally witnessed the resignation speech from inside the Oval Office, Mr. Nixon’s farewell address to the White House Staff the following morning, the Nixon’s helicopter departure from the South Lawn, and the swearing in of Gerald Ford in the East Room as the 38th President of the United States — all within just 16 hours on August 8th and 9th of 1974.

By October of that year Bill had taken on the additional volunteer job of training the president’s Golden Retriever, Liberty, and soon became a trusted unofficial personal advisor to President Ford. During the entire month of September of 1975 Bill lived with the Ford family in the White House residence to assist in the birth and raising of Liberty’s nine puppies. During that month, on separate trips to California, two women attempted to assassinate President Ford.

The experiences Bill had are special and personal — giving a unique look at not only the inner workings of the West and East Wings of The White House, but also upstairs in the residence and even Camp David. From gut-wrenching to humorous, heartbreaking to heartwarming, Bill shares a personal insight of the White House and first family that few people have experienced.

See The Book Project for more about Bill’s story…